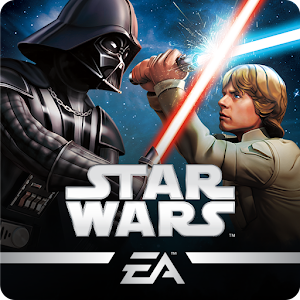 “Visually striking and with adrenaline-pumping Star Wars™ music, Galaxy of Heroes is a must-play for fans for the franchise.” – USA Today"The best Star Wars game to release for mobile devices in recent memory." – Gamezebo
Collect the most iconic Star Wars™ characters, like Darth Vader, Yoda, Luke Skywalker, and more, from every era – then conquer opponents in epic, RPG-style combat. Build the best teams and craft your winning strategy. Battle across iconic locations to become the most legendary hologamer in the galaxy. Create a Guild to lead friends against powerful bosses in Raids and top the leaderboards. You can also unlock new characters from Star Wars™: The Force Awakens and the upcoming Rogue One™: A Star Wars™ Story to make your team even stronger!
CREATE THE ULTIMATE TEAM Rebel leaders? Empire stalwarts? It’s your choice as you construct elite light and dark side teams while collecting heroes and other characters from the Star Wars™ universe. Make key strategic moves and pick teammates with complimentary abilities to assemble unbeatable squads!
BECOME MASTER OF THE GALAXY Defeat opponents and rise to the top as you dominate the galactic hologames in a far-off cantina. Upgrade your heroes’ abilities as you play for even more powerful attacks and bigger wins. Then fight other players in Squad Cantina Battles, PvP Squad Arena, and Squad Tournaments to achieve greatness.
PLAY WITH POWERFUL CHAMPIONSMake smart tactical decisions and equip your heroes with the ultimate gear to enhance their damage in galactic war. Unlock special leader abilities to make your team unstoppable as you unleash commanding moves like Darth Sidious’s Force Lightning, Chewbacca’s Wookiee Rage, and others.
RISE TO THE TOP IN GUILDS Lead Raids with friends and face off against powerful bosses like the Rancor and AAT Tank by creating a customizable Guild! Command your guildmates through Guild Chat and engage in Daily Guild Activities to earn rare rewards. Stake out your spot at the top of the Guild Leaderboards and watch your legend grow.
Download now for free! Visit www.starwarsgalaxyofheroes.com and follow @EAStarWars on Facebook, Twitter, and Instagram for the latest news and fun updates.
User Agreement: terms.ea.com
Visit http://help.ea.com/en/star-wars-galaxy-heroes/star-wars-galaxy-heroes/ for assistance or inquiries.
EA may retire online features after 30 days’ notice posted on www.ea.com/1/service-updates.Requires acceptance of EA’s Privacy & Cookie Policy and User Agreement. 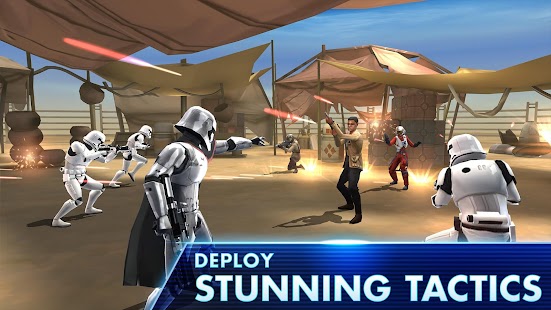 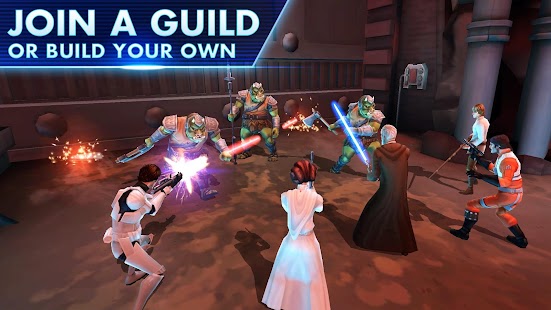 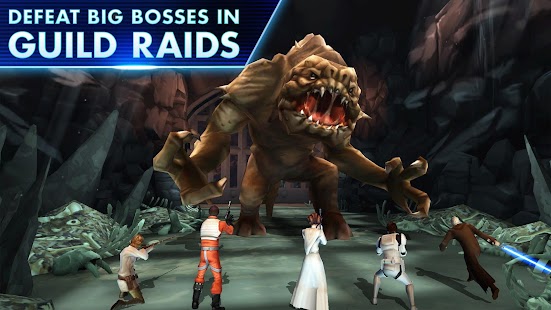 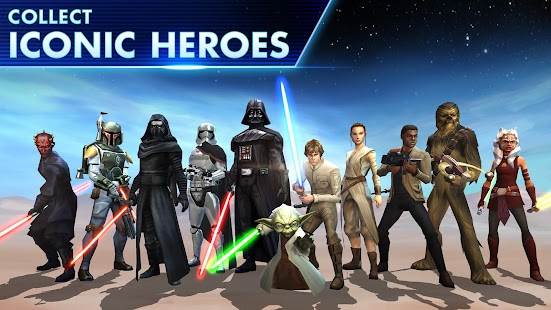