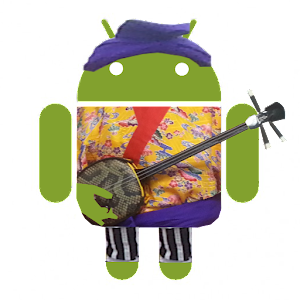 Kunkunshi Editor is the ultimate editor of Okinawan music. Unlike most of the music in the world, Okinawan music is not written in the traditional European music scores. Instead, they use a system called kunkunshi (工工四), which is a variation of the ancient Chinese system. The music in the kunkunshi is played with an instrument called sanshin, which is a variation of the traditional Chinese instrument called sanxian. At the same time, the sanshin is the ancestor of the Japanese shamisen.A kunkunshi contains the notes for the sanshin in a table. This table usually has 12 columns per page and 12 cells per column, except for the last page that just shows until the end of the music score. The table must be interpreted from top to bottom and from right to left, following the traditional Japanese reading system. Each pitch is represented by a different Chinese character, and it is possible to write a character between two cells to represent a note with smaller duration. It is important to notice that the Japanese characters do not represent fixed pitches as the western notes do, but they depend on the tuning of the sanshin, which in Okinawan jargon is called chindami. In addition to the notes, some special symbols are used to represent accidentals, repetitions and techniques such as hammer on, etc. Besides this table, the sheet may also include the notes for the voice and the lyrics of the song.
Kunkunshi features:
- Write the musical notes for the sanshin in a 12x12 sheet.- It can mark in red the notes that require moving your hand along the neck of the sanshin, such as "八", "九" and so on.- Write the syllables of the lyrics next to the music notes for the sanshin.- Write the musical notes for the voice next to the syllables of the lyrics- The musical notes for the voice accept rare notes such as "才", "汎" and "勺", as well as some symbols that represent features of the singing, such as holding the note "|", increasing or decreasing the pitch gradually like in a glissando "¦", etc.- Allows different chindami such as "hon-chôshi", "ni-agi", etc.- Allows different tunings for each chindami. For example, for "hon-chôshi" you can choose A2#-D3#-A3#, B2-E3-B3, C3-F3-C4, etc.- Allows setting the tempo of the song.- Includes fields for the names of the lyrics author and music composer, as well as particular notes about the kunkunshi.- Separates the lyrics into different strophes. You can add, insert, remove or even exchange the positions of the strophes.
Music player features:- Play, pause and stop your kunkunshi while you are creating it, to check that everything is correct.- Allows marking the note that is currently being played in the kunkunshi.- A special user interface lets you practice your kunkunshi: you see the notes coming and you have to play them at the right time!- Includes a simulation of the voice melody with a PCM sound (16 bits). Note: it is easier to hear this sound when you have a headset.
File manager features:- Create, delete, rename and duplicate kunkunshi files.- Export kunkunshi files into PDF format, MusicXML format or even MIDI files.- Share the kunkunshi files, as well the exported files, with other Android applications in your device.- Allows autosave kunkunshi files.- Automatically creates a backup of the open kunkunshi file if the application crashes.
Configurable:- Allows disabling the features that consume many resources, such as showing the lyrics and voice melody, the voice simulation, and highlighting in the kunkunshi the note that is being played. 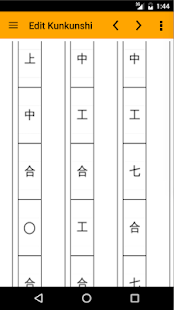 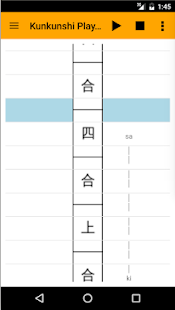 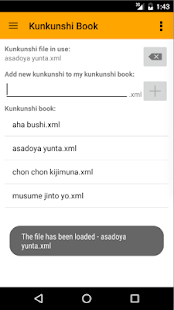 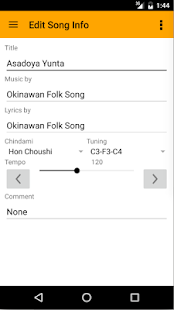